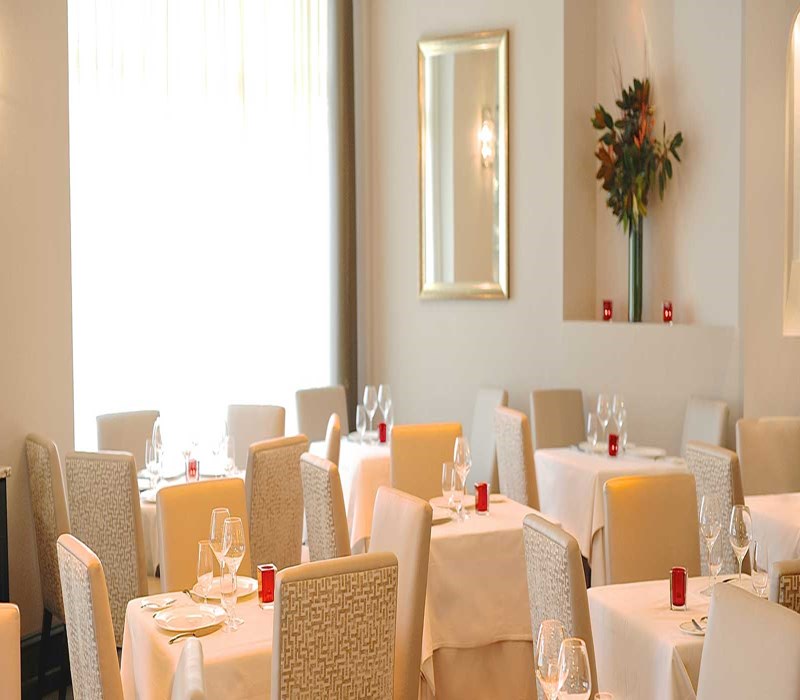 The Cast at Marcel's 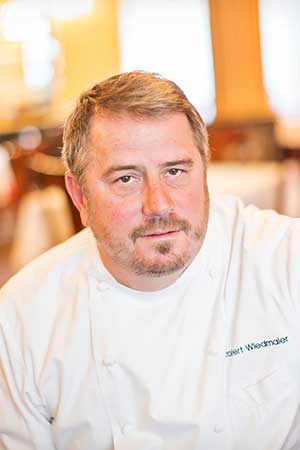 Chef Robert Wiedmaier rose from the ranks of dishwasher to earn a Michelin star and own and operate 11 restaurants in Washington, D.C., Virginia, Maryland, and Atlantic City.

He grew up in Brussels, Belgium, the son of a Holocaust survivor who spent eight months of the war hiding in a butcher shop in the south of France. A dyslexic, Wiedmaier gravitated to the kitchen at an early age, beginning his working life at 14. He later attended culinary school in The Netherlands, apprenticing at the Thermidor, a two-star Michelin restaurant in Holland. It was not long after that he found his way to the kitchen of the two-Michelin star Eddie Van Maele in Brussels. The experience was a revelation for the young chef, and gave him a clear vision for his future.

In 1986, chef Wiedmaier accepted the job of saucier at Le Chardon d'Or at The Morrison House, in Alexandria, Va., before joining the brigade at Le Pavillion, helping to create the finest nouvelle cuisine in Washington, D.C. A year later he was named sous chef at Aux Beaux Champs, in the Four Seasons, under the direction of chef Douglass McNeill.

By 1994, chef Wiedmaier was ready to strike out on his own. He opened Café on M at The Grand Hotel, where he established his signature Franco-Flemish style, before taking over at the Watergate Hotel, replacing the legendary Jean-Louis Palladin.

In 1999, Wiedmaier opened the contemporary, European, Marcel's. Sumptous in its elegance, with a refined and exacting cuisine that never goes out of fashion, the restaurant has not only become his flagship, but is also consistently ranked among the city's best by The Washington Post, The Washingtonian, and the readers of Open Table. It has earned numerous awards from Wine Spectator and the Restaurant Association of Metropolitan Washington RAMMY Awards, and its service and wine program has also received multiple James Beard nominations.

Chef Wiedmaier waited seven years to open his second restaurant, Brasserie Beck, also in Washington, D.C. Conceived as a relaxed and casual restaurant where diners could go for mussels, stews, and braises - along with one of the country's best Belgian beer lists - the restaurant recently celebrated its 11th birthday.

In 2009, Wiedmaier partnered with Kimpton Hotels' Lorien Hotel & Spa in Alexandria, Va., opening two adjacent establishments: Brabo and The Brabo Tasting Room. It was a successful, eight year run, full of honors and awards, after which the chef amicably moved on to concentrate on other opportunities.

The next year saw the launch of Mussel Bar & Grille in Bethesda, Md. The restaurant, a hearty celebration of pub grub, Belgian-style, has since grown to include locations in Arlington, Va., and Baltimore, Md.

A passionate lover of jazz, blues, and roots rock, the chef made his first foray into the music business in 2015 with a club, Villain & Saint in Bethesda. That same year saw the opening, as well, of Lock 72 in Potomac, Md.

The chef's newest venture, Siren, which opened in the Fall of 2017 at The Darcy hotel near Logan Circle, has enjoyed a brilliant debut. A seafood emporium with a dazzling fish bar, it received a Michelin star in 2018, as well as rave reviews in The Washington Post and The Washingtonian.

Chef Wiedmaier has been honored and awarded numerous times for his talent and service. In 2009, he was named Washington's Chef of the Year by the Restaurant Association of Metropolitan Washington. In 2012, the U.S. State Department and James Beard Foundation tapped him for its Diplomatic Culinary Partnership Initiative. That same year he was also inducted into The Knighthood of the Brewers' Mashstaff, a century old brewer's guild in Brussels. In 2014, he was brought in as the chef of honor to cook for the U.S. Ambassador to the U.K. at the new London embassy. He has even had a beer brewed and named exclusively for him, the double blonde ale Antigoon. He was featured on the James Beard Award-winning program, Chefs A 'Field, on PBS, and is a proud member of the Wild Alaska Seafood Congress of Conscious Chefs.

Last year he launched a consulting agency, Primal Cut Consulting, a full-service operation whose mission is to think boldly and fearlessly about the many complex issues facing the industry.

Chef Wiemaier lives with his wife, Polly, in Kensington, with his teenage son, Beck. His other son, Marcel, is away at college. 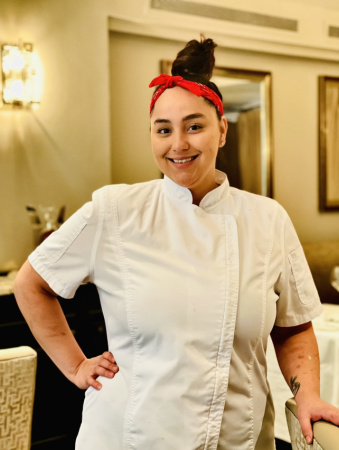 Jenn was born in Chicago moving to Hawaii at the age of five, and eventually settling in Maryland. By the age of 12 she had been exposed to many cultures and their cuisines, and her love of cooking, organically and accidently, turned into a career in the culinary arts. While growing up in a family that valued sitting down and eating dinner together Jenn assisted her grandmother in the kitchen from a very young age inheriting many of her skills. When Jenn was just 14 years old, her mother was deployed to Iraq, and at this point she began cooking dinner nightly for her father and sisters. This instilled in her an appreciation of food, and her dinners provided an anchor for her family during her mother's absence. At this point Jenn had planned on becoming a nurse and got a job as a prep cook & then pastry assistance at Founding Farmers to earn money for college. Almost immediately she found her passion for cooking to be stronger than her passion for nursing. Armed with determination and passion, she, and her now husband, enrolled at Louisiana Culinary Institute (LCI) where she graduated at the top of her class during an accelerated two-year program.

With dreams of working in a high-end kitchen she soon met Chefs Robert Wiedmaier & Brian McBride, who would become her mentors, and she one of their youngest talents. After a one-year stint at one of their restaurant group's Maryland locations her talents were very apparent, and she made the move to Marcel's. Becoming a Jr. Sous Chef after only 6 months and during this time working under Chef Wiedmaier she furthered her knowledge of French cooking techniques and learning to butcher the whole animal. Through the ups and downs of the restaurant industry she now finds herself as the Chef de Cuisine at Marcel's, commanding the brigade, and working daily to pioneer the most classic haute French cuisine. 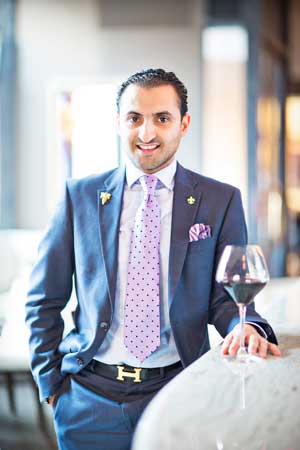 Over the past 13 years, Moez Ben Achour has risen from line employee to Sommelier, now overseeing staffing, training, and daily operations of Chef Robert Wiedmaier's notable flagship, Marcel's. Moez was instrumental in Marcel's achieving the 2013 Restaurant Association Metropolitan Washington [RAMW] RAMMY Award for "Wine Program of the Year" and the wine program attributed to the nomination for "Fine Dining Restaurant of the Year." 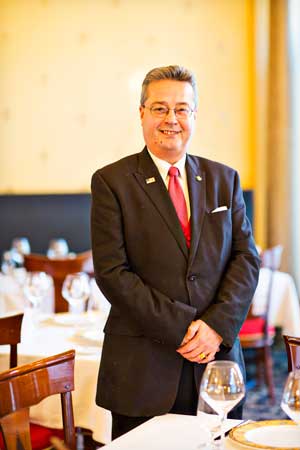 Marcel's welcomes you and your guests for dinner to one of the top restaurant destinations in the Nation's Capital. Our highly acclaimed seasonal menu of French and Flemish cuisine has won over even the hard-to-please critics.

Reservations are highly recommended. Please call (202) 296-1166. If you would like to make a reservation online, please use the form below. Please do not submit reservation requests by email or using our contact form. Not recommended for children under the age of 12.

Marcel's dress code is upscale. Most gentlemen wear jackets, however, not required. We respectfully request that gentlemen refrain from wearing shorts, sandals, sleeveless shirts, or baseball caps. Athletic wear and torn clothing are not permitted.

We are a short walk to the Foggy Bottom / GW Metro Station. Valet parking is currently suspended.

Marcel's has discontinued driving service to and from the Kennedy Center.

For private dining and Special Events, please ask for Liz Leger at (703) 307-2083. Our Palladin Room in the back of the restaurant is semi-private. The entire restaurant can be bought-out for special events and functions with keeping safe distances. It's the perfect place to hold a reception, ceremony or party in a premiere setting.

Book your Marcel's By Robert Wiedmaier reservation on Resy